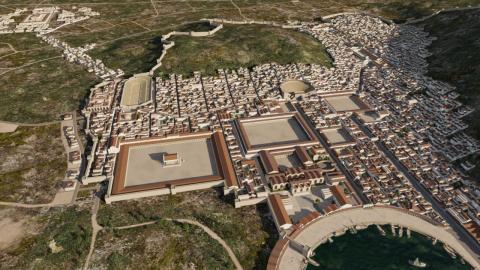 Tweet
iOS / Android. If app not installed, leads to store:
Discover it within the VirTimePlace app
VTP ID:
16
Mecenas rating:
0
No votes yet

According to legend, Ephesus was founded by Androclus at the end of the 11th century BC and, at the beginning of the 7th century BC, it was already a populous city with a relevant role in terms of culture, religion and commerce.
Being a member of the Ionian league (12 Greek colonies on the Anatolian peninsula facing the Aegean Sea), it suffered numerous looting and occupations by Cimmerians, Persians and other kingdoms that, in general, enhanced its status as a cult center for Artemis. In fact, its first Artemission was built by Cresus, the king of Lidia, after his conquest in 560 BC.
But, basically, its different conquerors considered it a source of incomes, so, in 334 BC, Ephesus receives Alexander the Great as a liberator. However, his successors were not very benevolent towards the city and, after a brief period under the jurisdiction of Pergamum, in 133 BC Attalus III, his last king, died, without descendants, who ceded it to Rome by agreement.
Under the dominion of Pergamum, its port had become one of the most important in the area, but the administration of Rome was no better than the previous ones and, suffering its abuses, the Ephesians joined Mithridates in a revolt that ended with the lives of 80,000 Italics in 88 BC.
Mithridates was defeated by Sila, but it was Caesar who succeed to regain the affection of the city when he forgiven his debts and abolished the collection system after his victory at Pharsalia in 48 BC.
Later, despite being on the Marco Antonio side during the fourth civil war, Augustus will give a definitive impulse towards his greatest period of splendor with the pax romana, leaving such emblematic spaces as the Library, the theater, the Via of the Curetes or the Artemission himself, one of the 7 wonders of the ancient world.