The acropolis, an elevated city, of Athens, is probably the best known of Greece. Its walled enclosure, and its freshwater wells make it a really defensive enclosure, but also hosted religious functions.
Its main archaeological elements of classical era are: the Parthenon, Erechtheon, Propylaea and Temple of Athena Nike, on the Acropolis, as well as Dionysus Theater, which is located on its southeast flank. 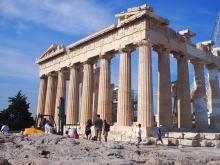