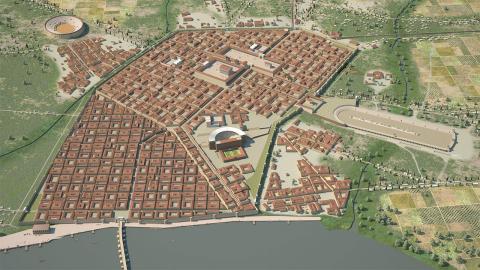 Tweet
iOS / Android. If app not installed, leads to store:
Discover it within the VirTimePlace app
VTP ID:
3
Mecenas rating:
0
No votes yet

Córdoba is one of the oldest cities in Europe, founded in the 2nd century BC and reborn in the middle of the first century, when Cesar destroyed it after its victory against Pompeii.

Since then, Augusto granted him the status of Colonia Patricia and began a process of monumentalization with various buildings and urban structures such as  the theater, circus, amphitheater, temples, burial mounds, etc. With this recreation you can walk through this Imperial Cordova of the 2nd and 3rd centuries, including the one that could be Maximiano's Palace, already built at the falling off of the Roman Empire, from the fourth century.

The monumental complex formed by the Roman bridge and the Mezquita is an ideal place to start a tour across some streets that still have remains of the old city which can be visited. So, you can understand how the old Roman City fits in the current Cordoba, with the help of VirTimePlace.

This VirTimePlace contains buildings and structures that changed between the first and fourth centuries, so it should not be considered as an exact photo of a specific year, but as the representation of the most significant elements of the city in that period.